Books to Teach Children About Afghanistan · The Little Bookroom

Books to Teach Children About Afghanistan 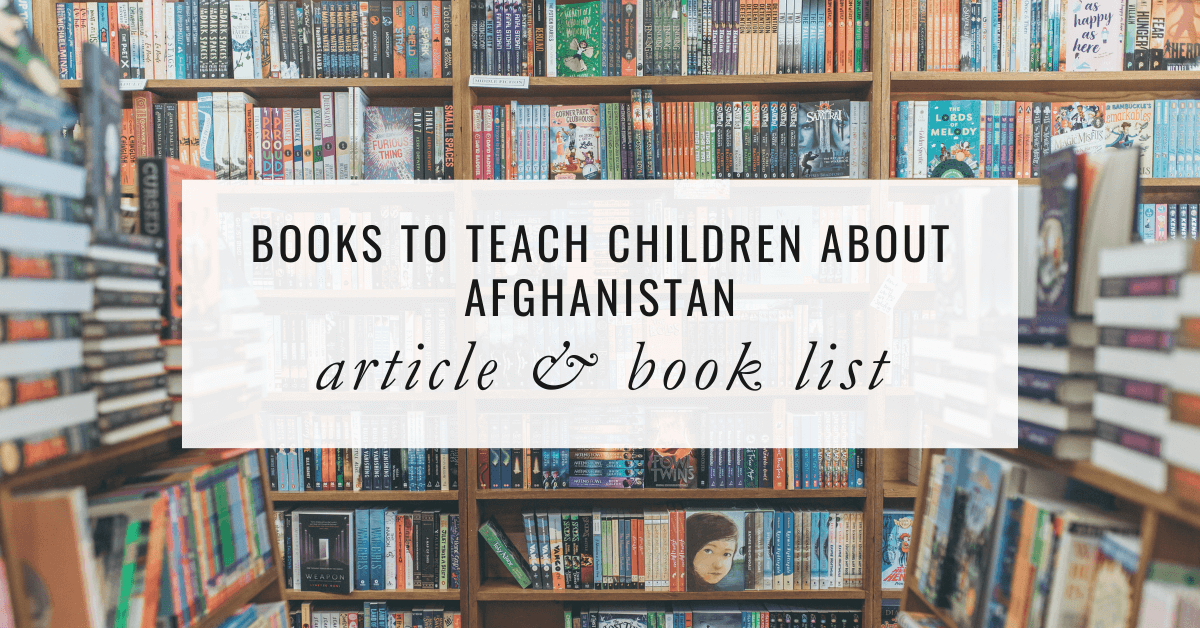 Even though Afghanistan has been in the news for our children’s entire lives, it may only be now that they are beginning to ask questions about it. With the troop withdrawal, the Taliban taking power and the 20th anniversary of the September 11 attacks, Afghanistan is a topic they may be asking about. If you have children wondering about the war in Afghanistan, what is happening to people and why, and what are Afghan children’s lives like, you might find it helpful to have a book or two to help you out.

Before reading this list, it’s important to note that history is being written as we speak, and it will take book publishing a while to catch up. Many of the books on this list are over ten years old from back when there was a Western peak in interest in Afghanistan and Afghan stories, particularly refugee stories. With this in mind, there are some excellent background resources that have been developed by journalists that give child-appropriate overviews of the current state of affairs in Afghanistan and the history underpinning it. Some of the best include Squiz Kids podcast from 17th August 2021 in which they have a quick segment called Afghanistan Explained, suitable for young children. ABC’s BTN has a clear explanation that includes the voice of children: Afghanistan Crisis Explained for Kids Behind the News August 25th 2021.  For older children you can’t go past Matilda Boseley’s TikTok primer from the Guardian.

The news is generally made for an adult audience and often requires a certain amount of background knowledge in order for it to make sense. For children embarking on a big, serious topic, it can be useful to present them with information that is relevant and relatable to them but still developmentally appropriate. Fiction is particularly useful for this as it is often presented from a child’s point of view in a way that news and non-fiction sources aren’t. It allows for the reader to feel empathy and emotion in a safe space.

One of the tricky things about sourcing this sort of fiction is that even though there have been over 20 years of the Western spotlight being trained on Afghanistan, there aren’t many children’s books available in Australia written by Afghan authors. Despite this, there are high quality books written by non-Afghan writers that are a great entry point for young readers.

The Library Bus by Bahram Rahman and Gabrielle Grimard
A story about an initiative to educate girls in a hostile context.

Ali’s Story: A Real-Life Account of His Journey from Afghanistan by Andy Glynne, Salvador Maldonado
A refugee story from Ali’s point of view.

Parvana by Deborah Ellis
Also available as a graphic novel, Parvana is a particular favourite of English teachers for children 12+. The story follows Parvana’s life in Kabul as the Taliban begin to take over and her family find themselves their target.
Deborah Ellis has written a number of other books telling stories about Afghan children’s experiences including: Parvana’s Journey, Parvana’s Promise.

Ground Zero by Alan Gratz
Dual point of view that includes the perspective of an American child, Brandon who is in the Sep 11 attack on the World Trade Centre and Resmina an Afghan girl living in present-day Afghanistan growing up in the aftermath of that attack. This novel has a focus on 9/11.

Shadow by Michael Morpurgo
Shadow is a bomb-sniffing dog who is separated from his soldier in Afghanistan. He makes friends with an Afghan boy but tries to reunite with his soldier.

Naveed: Through my Eyes by John Heffernan
Naveed lives in a conflict zone in Afghanistan.

Taj and the Great Camel Trek by Rosanne Hawke
This historical fiction explores the experience of a child in Australia of Afghan descent who joins the explorer Ernest Giles on his camel as they attempt to cross the Australian desert. It’s a story that explores connections Afghan people have had with Australia since colonial times.

When Michael Met Mina by Randa Abdel-Fattah
Mina is an Afghan refugee, Michael comes from an anti-refugee family. When they find themselves at the same school their lives collide.

Enduring Freedom by Trent Reedy and Jawad Arash
After September 11, 2001, Joe a young American soldier is shipped out to Afghanistan where he meets Baheer and Afghan teen whose family have been torn apart by the war. They must get past their seemingly unsurmountable differences in order to become true allies.

The Kite Runner by Khaled Hosseini
This is a popular and highly acclaimed novel that also has a movie version. Please note that it has some confronting scenes in it include a sexual assault. Check it to see if it is suitable for your reader. Most suitable for 15+.

The topic of refugees is huge and deserves and article of its own. In the meantime, if you want a comprehensive list of titles that cover a range of geographical and historical experiences, click here.

If you want stories specifically about the Afghan experience in Afghanistan, in transit and in Australia, try these.

The Ink Bridge by Neil Grant

Even though the headlines seem to be all about war and refugees, it’s important for children to understand the layers of history, culture and geography that underpin the situation.

Timelines of Everything by DK
Has timelines of the Persian Empire and the Middle East Conflicts. Highly illustrated and brief, but great for an overview and starting point.

What Happened When in the World. History As You’ve Never Seen It Before by DK
Has spreads on the Bronze Age, Persian Empire and the Silk Road.

The Honey Thief by Najaf Mazari and Robert Hillman
A collection of tales that combine traditional and modern storytelling. The stories depict Afghanistan as a country rather than a place at war. This is a book written for adults and is therefore most suited to 15+.

The Great Game by Peter Hopkirk
Victorian British vs Tsarist Russian agents gathering intelligence and making connections that shaped international foreign policy in relation to Afghanistan for generations. This is a book written for adults from a colonialist perspective and is therefore most suited to 15+.

Nobel Peace Prize winner Malala is Pakistani, but her story and profile provide the opportunity to examine the close links between Afghanistan and Pakistan and the experience of women and girls who live under the Taliban. Children feel a connection with her story and the myriad books by or about her provide relatively contemporary information. There’s literally a book for every age group.

I Look Up to Malala Yousafzai by Anna Membrino & Fatti Burke
Board book. 0-3.

We Are Displaced: My Journey and Stories from Refugee Girls Around the World by Malala Yousafzai
For readers 14+.

If you want your reader to explore a deep human connection with Afghanistan and to show that there is more to the country than the experience of war, you can try books that showcase art, culture, history and food. Many of these books are for a general audience and not designed as ‘kids books’, but they are easily enjoyed together.

Brave with Beauty: A Story of Afghanistan by Maxine Rose Schur, Patricia Dewitt-Grush
This is the story of Queen Goharshad, a 15th-century monarch, who held great power and influence.

Please note that these books of Steve McCurry’s photographs were not designed for children. He is a photojournalist who often worked in war zones. This means that these collections contain some very confronting pictures that aren’t suitable for young children and may not be suitable for all older children either. Please check whether these collections are suitable for your particular reader. We have included them because they contain beautiful and important images of everyday life in Afghanistan spanning over 40 years. They are particularly good for starting conversations with children as well as being beautiful and thought provoking in their own right.

Afghanistan by Steve McCurry
This collection spans over 40 years of photojournalism in Afghanistan with a particular emphasis on portraits and landscape. It gives an insight into everyday life, including the lives of children.

Steve McCurry Untold: The Stories Behind the Photographs by Steve McCurry
Not exclusively about Afghanistan, but includes the story about McCurry’s famous photo ‘Afghan Girl’ and how he found her again 20 years after he took the photo. Be careful with some of the images around young children, especially those of the Kuwait war which are very graphic.

~ Gisela Ervin-Ward teaches children with learning difficulties how to read and provides literacy consulting to schools @podliteracy. She is obsessed with children’s books and writing and muses about them at @giselaervinward. www.giselaervinward.com

You can see our other articles and their accompanying book lists HERE.